As Prime Minister Theresa May looks to try and resolve the problem of the ‘Backstop’ plan within the proposed agreement for the UK to leave the European Union, planning is underway on the waste front in case of a ‘no-deal’ hard Brexit. 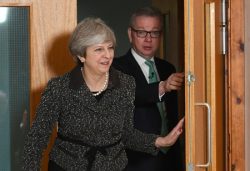 In particular, there has been a focus on the issues surrounding the refuse derived fuel (RDF) market and whether trucks taking material for export by ship, or driving direct to the continent, could get caught up in traffic queues towards the ports.

Plus there is a concern that paperwork completion could also cause delays if the ‘competent authorities’ on the Continent (equivalent to the Environment Agency in the UK) don’t agree new approvals for the RDF to enter their countries.

Michael Gove, Secretary of State for the Environment, has confirmed that some waste sites may be allowed to temporarily exceed their permitted storage tonnages in the event that movements of material are disrupted by a ‘no-deal’ Brexit.

At the end of January, it was revealed by Mr Gove that Environment Agency staff are engaging with operators to identify where issues, including stockpiling, may arise. A particular focus is on the south east of England, which is expected to be hit the hardest if waste exports to the European Union are interrupted at Dover.

Mr Gove stated: “The Environment Agency is ready to respond to requests from industry for additional storage of waste and will process any such requests as promptly as it can. In the event of a no deal scenario causing stockpiling, the Environment Agency is able to issue an ‘enforcement position’ to allow waste sites to go over the permitted levels on a temporary case-by-case basis.”