The amount of single use carrier bags used by customers at UK supermarkets rose from 8.1 billion in 2012 to 8.3 billion in 2013, according to the latest figures published by the Waste & Resources Action Programme (WRAP).

This represents a 3.2% increase and is the fourth year running that the figures have shown a rise in single-use carrier bag usage at UK supermarkets. 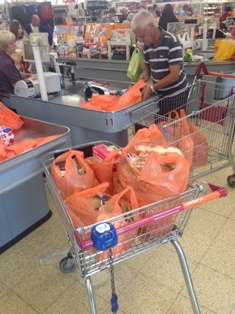 However, the data also shows that the overall weight of single-use supermarket carrier bags used by customers fell by around 3,100 tonnes in 2013, despite the increase in the number of bags used.

In addition, the WRAP data shows that there was a 4.8% increase in virgin polymer used in all carrier bags – including re-usable bags – between 2012 and 2013.

According to WRAP, single use ‘thin-gauge’ bags constitute 95% of all bags used by customers at UK supermarkets. Supermarkets participating in the WRAP study were: Asda, Co-operative Group, Marks & Spencer, Morrisons, Sainsbury’s, Tesco and Waitrose.