Guidance has been issued for organisations seeking to submit proposals for a waste electrical and electronic equipment (WEEE) compliance fee methodology that will help to determine how the fee is set for 2016.

Defra has set a 30 September deadline for compliance schemes and other stakeholders to deliver proposals for a potential fee methodology for the year. Should Defra opt to use a compliance fee for 2016, the Secretary of State for Environment would then approve a methodology to determine the fee.

The compliance fee is intended to discourage PCSs collecting volumes of WEEE significantly above their collection targets and then seeking to sell the surplus evidence to schemes seeking more evidence to meet their obligations.

The fee is imposed on schemes which have been unable to collect enough evidence for the recycling of a particular type of WEEE product. It was brought in as a mechanism under the 2013 WEEE Regulations, and first used in 2014. 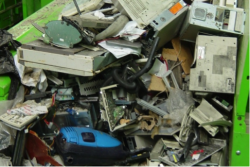 The mechanism for calculating the compliance fee is changed yearly – with Defra accepting proposals to establish the fee for 2016 until September 30. The methodology for the fee will be announced in mid-February which Defra claims will allow schemes sufficient time to pay it in line with the compliance deadline of March 31 2015.

According to Defra, the methodology for calculating the fee should be established in a way that encourages compliance through collection and treatment of WEEE via the network of CA sites across the UK.

For both 2014 and 2015 a methodology proposed by the Joint Trade Association has been approved for use by the government.

Previously, money raised through the compliance fee is delivered to council schemes designed to increase the collection, re-use and recycling of unwanted electrical items – with around £375,000 having been allocated from the 2014 Fund.