While there is a spread of views across the UK about the referendum and whether to vote in our out, one of the few speeches made recently about the environment and the EU came from former long-serving Environment Secretary, Lord Deben.

Talking about the environment generally at the Awards for Excellence ceremony in London, he also made reference to the European Union. 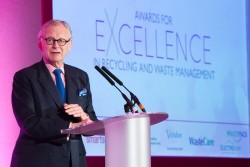 Lord Deben, who as John Gummer was secretary of state for the environment from 1993-1997, oversaw the introduction of the packaging recovery note (PRN) system as well as paving the way for the introduction of a landfill tax across the UK. He is also chairman of the Climate Change Committee and referred to packaging and climate issues in his address.

Turning to the EU referendum, which is just over one month away, Lord Deben claimed that he had first become ‘enthusiastic’ about waste and recycling, when the UK was described as the ‘dirty man of Europe’ due to its poor recycling rates in the early 1990s.

He added: “It was the pressure of the European Union that brought us to the position we are today. We pressurised our colleagues to do other things which we are better at.  “We are better together and the idea to exist separately when we are so close and so many things are inter-related seems to me just barmy. Businesses are not tied to these isles. Businesses are Europe wide. The environment is a matter which can only be dealt with on a European basis.”

Concluding his address, Lord Deben argued that businesses can continue to play a role in influencing future legislation if the UK remains a part of the EU.

Editors note: This article is a report of the event and does not necessarily represent the views of the editor. It is fair to say, as an affluent economic area Europe has played a major role, in recent years, in helping to lead the way in improving environmental standards in the world. America, Japan, Australia and China, along with most other industrialised countries are part of the global challenge. In our opinion, the decision on the 23rd June will have little to no impact on what Britain does in the future when it comes to protecting our environment.