Resource management minister, Rory Stewart, has declared an ambition to see the UK become the “best country in the world for recycling”.

The strong statement in favour of recycling was delivered at the combined annual conference of the Chartered Institution of Wastes Management (CIWM), the Environmental Services Association (ESA) and the Resource Association in London on June 24. It comes just a few weeks after Mr Stewart was confirmed as the minister with responsibility for waste and recycling within the new Conservative government. 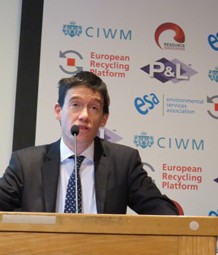 Mr Stewart said: “We really want to make the United Kingdom the very best country in the world for recycling. I’d like people in 20 years’ time, sitting around in grisly conferences in Australia or Austria or Canada, to say if you want to look at a country that is really leading the world, you should look at the United Kingdom.”

Mr Stewart also referred to the Circular Economy proposals being refreshed by the new European Commission.

While noting that the proposals, which are due out later this year, should fit in with UK conditions and the needs of industry, he confirmed that the Department for Environment, Food and Rural Affairs (Defra) is working on making them “more ambitious”.

He said: “We are awaiting new proposals from the Commission but we are moving hard in the British government and with you to develop a new package of measures that are going to be more ambitious, I’m sure, than those that have been set out before. We have to make sure they are right for the UK and make sure you look at proposals, to make sure they meet our particular conditions and your particular businesses.”