The UK will be under more pressure next year to recycle cardboard and other paper packaging materials in the wake of research which found there is more such materials in the marketplace than expected.

This means that recycling evidence – PRNs – mainly garnered from the recycling of cardboard will be in demand, although its value may not rise much from around the £1 per tonne mark currently seen as supply is expected to meet demand. 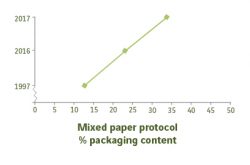 One way that collection levels under UK system will be helped is by changes to the methodology used in the packaging waste system. This concerns the mixed paper grade which is a separate grade from cardboard.

This year it was accepted that an estimated 23% of mixed papers was packaging and accordingly 0.23% of a PRN could be issued per tonne, and in practice, 2.3 PRNs per 10 tonnes. Now, however, that percentage is to rise. 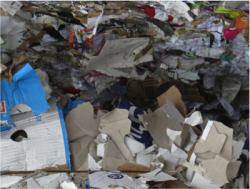 The change will come into force from 1 January 2017 via the national mixed paper protocol – which defines the amount of claimable packaging waste in the mixed paper grade. This will be increased from the current figure of 23% to 34.5% – in 2014 the eligible percentage stood at a lowly 12.5%.

The increase follows a consultation between Defra, the Advisory Committee on Packaging (ACP), the Confederation of Paper Industries and the Recycling Association, as well as a seven day sampling programme involving UK mills.

Phil Conran, chair of the Advisory Committee on Packaging, said: “I am very grateful to the paper industry for carrying out this more rigorous sampling work following the interim protocol of 23%. It is great to see the level raised to accurately reflect the composition of mixed paper waste.”