Food retailer, Iceland, has confirmed that it will be carrying out a six-month trial of its own deposit return scheme (DRS) in Northern Ireland. 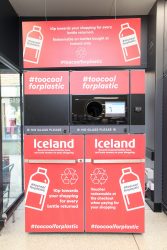 The retailer is one of several businesses and groups looking at the potential for a DRS, which has been suggested by the government in its Resources and Waste Strategy.

The trial for drinks packaging will take place at its Belfast Park Centre Zone, building on the momentum of the retailer’s existing trial, which launched in May last year. Iceland’s current system has seen reverse vending machines being allocated to a number of stores including in; Wolverhampton, Mold, Fulham and Musselburgh. A machine has also been delivered for staff to use at the retailer’s headquarters in Deeside.

The scheme provides customers with a 10p voucher for every Iceland-branded bottle they return, which can be spent in-store. So far, over 311,500 bottles have been returned within the first six months of the original trial.

Richard Walker, managing director at Iceland, explained that the scheme has been well-received so far by customers. “The overwhelming consumer support we have received in response to our reverse vending machine trial clearly demonstrates consumer appetite for improved in-store recycling, and deposit return schemes,” he said. “We have expanded our trial to Northern Ireland to ensure our trial is as robust as possible and is representative of customers from across all of the UK.”

Mr Walker continued: “The findings will inform future Iceland initiatives and planned roll-outs of recycling schemes, empowering retailers and consumers to tackle the scourge of plastics, head on.”