We are pleased to announce the recent commissioning of ‘Olga’ our high tech battery sorting machine recently purchased from Refind in Sweden.

Olga has an eye for detail and using a very sophisticated camera system compares images of passing batteries to a database of images and ejects batteries into the correct container using compressed air jets. 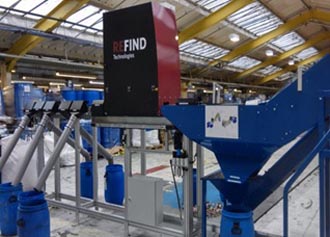 The batteries pass the camera too fast for the human eye to detect but the machine recognises and sorts into the correct chemistries with a 99.5% accuracy, a testament to the Swedish engineers that built her.

Having placed the order last autumn, we have since re-organised our national battery collection and sorting operations with the development of a dedicated £250,000 operation in Elland, North Yorkshire.  Although Olga is the third of her kind in the World, WasteCare has gone a stage further with an in-house developed pre-sorter which will further increase performance.

The recent clarification from the EA (see separate news article) on what is a portable battery has pushed forward BatteryBack’s plans to build Britain’s first battery recovery plant.

In the meantime, Battery Recycling Manager, Neil Chappell and his team are putting Olga through her paces.