The government’s minister in charge of waste and resources, Rory Stewart, has left Defra to take up a post within the Department for International Development, as part of a reshuffle by the new Prime Minister Theresa May.

Mr Stewart’s departure has seen Dr Thérèse Coffey take up the vacancy within the Department for Environment, Food and Rural Affairs, although at the time of writing it has yet to be confirmed that she will also take over the resources portfolio. 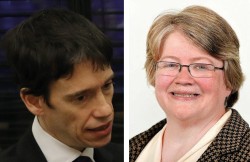 Mr Stewart served just 14 months in the post as resources and recycling minister since he took up the position after the General Election in May 2015. During that time he had consistently asked for help from the waste management industry for ideas in drawing up a waste policy and had lamented the fact that he had little budget and a reduced number of officials.

Dr Coffey was previously the deputy leader of the House of Commons serving under Chris Grayling and served on the Culture, Media and Sport Committee until she was appointed parliamentary private secretary to Michael Fallon, minister for business and energy. Mr Fallon had responsibility for the WEEE directive which is now overseen by Defra.