Alkaline battery producer Duracell has today announced that a scheme it ran last year to encourage children to recycle batteries has seen over 2.3 million recycled. 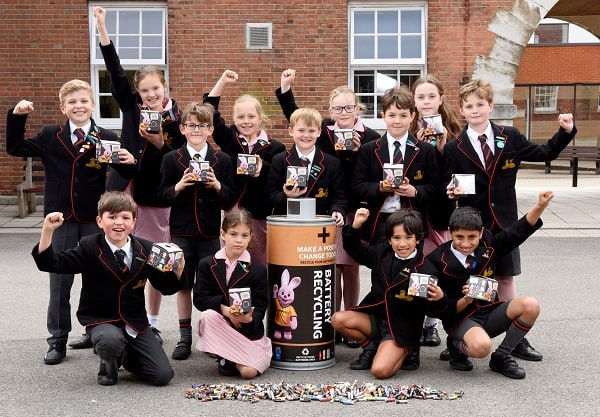 The nationwide initiative, ‘the Big Battery Hunt’, was launched last year by Duracell in partnership with compliance scheme BatteryBack.

Pupils from Portsmouth Grammar School who have taken part in the Duracell Big Battery Hunt.  More than 500,000 pupils took part in the scheme across 2,700 schools across Britain.

Figures compiled by BatteryBack last year show that Britons “hoard” up to 433 million used batteries in their homes.  According to the battery producer, despite much of the population considering themselves ‘active recyclers’ the UK has one of the lowest battery recycling rates in the EU – with an estimated 20,000 tonnes of batteries ending up in landfill each year, the company claims.

Christina Turner, associate marketing director at Duracell UK, explained that Duracell is committed to also minimising waste in the first place.  “The initial results have once again surpassed our expectations and proved how the enthusiasm among the youngest members of our community can have a positive long term impact on the environment,” she explained.

Ms Turner added: “As well as encouraging the nation to recycle old batteries, Duracell is dedicated to be minimising waste in the first place by increasing battery life and ensuring consumers get the most from the product, which is where the Duracell PowerCheck feature comes in. On average, about one in three batteries gets thrown away with power still inside so PowerCheck ensures you use battery to the full.

“The average Brit now uses about 10 batteries a year, so it’s not hard to imagine the numbers of used batteries either left redundant in kitchen drawers or even worse, in landfill sites.”

David Reynolds, Group Technical Director, added that the scheme helps people to “urgently and collectively change our nation’s attitude to recycling”.  He said: “The average Brit now uses about 10 batteries a year, so it’s not hard to imagine the numbers of used batteries either left redundant in kitchen drawers or even worse, in landfill sites.

“Given current recycling rates, it is clear we need to urgently and collectively change our nation’s attitude to recycling and we are delighted to partner with Duracell to learn how to do this successfully in order to make a positive, permanent change. The results highlight battery recycling behaviour in homes across the country and feedback from the schools and the enthusiasm from the children taking part has been hugely inspiring”.