The Awards saw a range of businesses recognised for their success in reducing waste to landfill and developing recycling and other initiatives. These included Croydon council, MITIE, Network Rail, Barhale Trant Utilities and KP Snacks.

WasteCare was pleased to support the Zero Waste Awards with a recent celebration luncheon taking place at Coombe Abbey in Coventry on the 10th April. Attendees heard from Will Duckworth, deputy leader of the Green Party. Speaking at the event, Councillor Duckworth, who serves on Dudley Metropolitan Borough Council, argued that recycling should be a last resort. 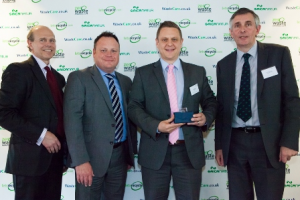 He said: “Now, that’s not to say I think that people should throw things away. It’s that reuse should be considered first, recycling should be the last resort and that throwing things away should never happen.”

Emphasising the need for waste minimisation, Cllr Duckworth went on to argue in favour of the return of a deposit system and reuse of containers and for a re-think on continual economic growth and the consequent increase in waste.

The Green Party deputy leader went on to call for a strategic re-think, to get back to why an economy is important so that everyone can benefit from what is produced. “And included in that is that if we change our economy, if we make use of what already exists, we produce less waste.”

He concluded by calling for more repair of products saying that while creating new products created jobs. He said: “Jobs are also created by repairing things… reduce, repair, reuse, and only then if you have to, recycle.”

Editor’s comment: These are lofty aims which will certainly contribute to the debate.