A fall in demand for waste electrical and electronic equipment (WEEE) evidence has impacted on the collection of material from local authority civic amenity sites.

As a consequence of the demand change, Bexley council is believed to be the first local authority to use ‘Regulation 34’ under the amended WEEE regulations – it has requested waste management firm Veolia to collect the material. Regulation 34 forces a WEEE compliance scheme to pick up the material from a council’s sites if the authority has been unable to secure a contract with a scheme to clear the material. It is understood that Veolia had been collecting the material but had told Bexley that it was discontinuing the service.

A shift in the demand for WEEE evidence has led to changes in the market for WEEE from council sites. 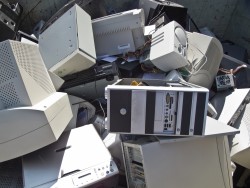 The move by Bexley hints at a wider shift in the WEEE market which has arisen after changes to the WEEE Regulations, brought into effect in 2014.

Under the regulations councils can offer free access to the WEEE collected at civic amenity sites to producer compliance schemes which have an obligation to collect the material for recycling on behalf of their members.

Before the changes, compliance schemes could collect a greater proportion of WEEE than they needed to meet their targets and sell the surplus evidence to competing schemes, who were looking to make up a shortfall in their collection requirements.

As a result, council collection contracts were sought after as a guaranteed source of WEEE tonnages. Some schemes would offer ‘added value’ perks to councils to secure the work.

Since the changes to the regulations were brought in back in 2014, schemes which are unable to collect enough evidence to meet their members’ obligations no longer have to secure evidence from those with a surplus, and can instead opt to pay a compliance fee to meet the targets.

The compliance fee is a penalty payment made for any shortfall in collections. It also means that broadly speaking, schemes who over collect could be unable to cover their cost of collection and treatment of the material through the sale of evidence as the schemes with a shortfall don’t have to buy the over collected material.

Bexley is understood to be the first authority in the UK to have been through the Regulation 34 process, following the expiration of its WEEE clearance contract with Veolia.