Statistics published by Defra have suggested that the 2017 collection target for waste electrical and electronic equipment (WEEE) has been missed. 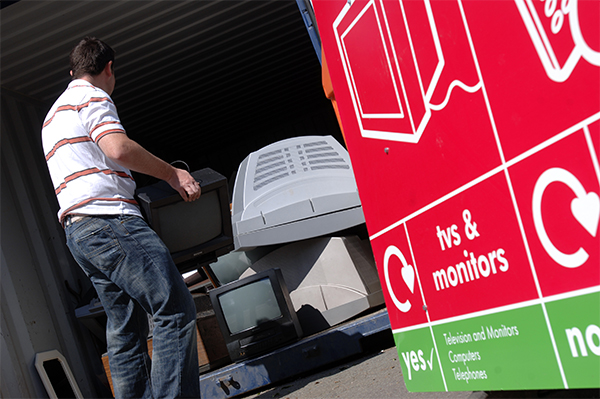 A number of compliance schemes are thought to have missed the overall 2017 targets, which mean those which failed to do so will have to pay a fee on the differences. This is broadly-speaking calculated by the average cost of collection multiplied by how far away they are from the target. Estimates have suggested that the overall combined figure will be more than £1million.

This money is then used for a variety of initiatives including promotional campaigns to encourage WEEE recycling, and support for local authority collection activities.  The total amount of EEE placed on the market in 2017 dropped by over 10% in 2017, to 1,328,901 tonnes. This coincides with a fall of around the same figure with the amount of WEEE collected in the same period. This means that compliance schemes collected 39% of WEEE placed on the market.

The UK has an EU-set target of 45% for the amount of WEEE placed on the market which is collected. However, Defra can use what are known as ‘substantiated estimates’ as part of the figure. This is WEEE which could have been sent for scrap metal or products which have been sent for reuse.

However, Defra needs to be able to validate the estimates.

The question is why? In the past Britain had successfully achieved recycling rates comparable with many of the higher achieving member states in Europe. This latest data is very disappointing. All the main producer compliance schemes have failed to meet their targets so there has to be a systemic problem. Have the WEEE streams changed significantly, are the recycling targets unrealistic or has the performance of the weee recycling sector deteriorated?

In our opinion it is a bit of all three.

Changing waste streams – The biggest change has been the switch to flat screen TVs from heavier CRTs, although more recently sales of flat screen TVs have tilted towards the larger screen sizes and therefore placed on market weights have risen again. Due to the lag between sales and weee generation there maybe anomalies in waste/new ratios. A similar issue applies to Cat 13, lighting although this has been swamped by the introduction of dual use. Refrigeration may also be distorted as larger American style fridges have replaced smaller and lighter units.

Recycling targets – Each year the EA put forward target rates for each category of WEEE. These figures are based partly on past performance, partly on a judgement call as well as an aim to increase recycling performance generally in order that we meet the European directive. In other words, it is fundamentally subjective and does not necessarily take account of key factors. For example, we have seen a massive switch to new technology, especially in display. This has resulted in a massive increase in older CRT models being discarded followed by a dearth of display WEEE as consumers enjoy their newly acquired flat screen TVs. The impact of the national switch over continues to have an impact. The same can be said with the switch to LED lighting and more generally the adoption of smaller devices. The growth in this sector has ensured consumption, WEEE placed on the market (POM), by weight has increased steadily over recent years, although weights n most categories have plateaued in the last year. This may be in part the effect of lower disposable income but it is also the case that many consumers do not throw away their unwanted devices but keep them in the back of a cupboard. This means that some of the targets may not be achievable as the amount of expected WEEE is simply not there to recycle.

What makes the challenge all the harder is that EA data shows around half of all WEEE is being processed out with the registered AATFs and is not declared for the purpose of generating evidence.

Poor recycling performance – It is fair to say that investment in this sector has decreased in recent years. Without further investment recycling rates cannot continue to rise. The concern is that performance has recently flatlined and in some instances fallen back. Companies will not invest unless they can see a return. Low commodity prices in 2016 would have been compensated by increased evidence values but following the introduction of the WEEE 2 amendment to the regulations that mechanism no longer functions. Some estimate this has taken over £20m from the sector and therefore denied the investment needed for growth. Of course, this money has been retained by the producers which is a good thing but has it gone too far. Many of the producer schemes are standalone businesses that totally rely on waste management companies and recyclers to make the investment and to do the work. A PCS is simply moving evidence notes from the recycler to the producer. They need to make sure they continue to feed the goose that lays their egg!