Waste and resources charity, WRAP, has labelled 2018 Recycling Week “the best so far” in its 15-year history.   This year’s campaign was centred around plastics, with the theme ‘Recycling. We do. Because it matters,’ which took place week commencing 24th September. 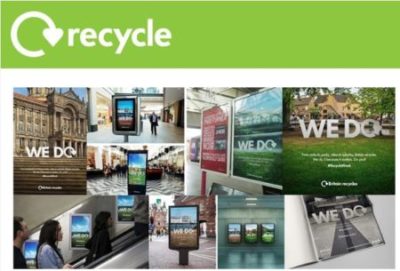 Over the week, more than 100, local authorities, retailers and brands took part  to raise awareness and the importance of recycling; including Lewis, Sure, H&M, Danone, Tesco and Heinz.  Many waste companies and groups also participated by launching their own events and campaigns to hammer home the message of recycling to employees, customers and households.

One of the key achievements of the campaign, WRAP notes, was #RecycleWeek, trending at #1 on Twitter and reaching over 27 million people on social media.  Another success for WRAP was the launch of Recycle Now’s Do/Does campaign, delivered through a social media and out-of-home advertising campaign around England and Northern Ireland.  The project featured a national tour of a ‘WE DO’ sign, which aimed to show “that as a nation ‘We Do’ recycle”. The main objective, according to the organiser, was to integrate with Recycle Now’s “normative messaging approach in an attempt to change recycling behaviours.”

WRAP confirmed that it will be continuing its recycling incentives in Winter, with the launch of Recycle Now’s Christmas ‘resource pack’ to help local authorities and businesses raise awareness over the festive season.  This will comprise of Recycle Now’s Christmas ‘resource pack’ containing “new digital/social media assets,” together with a template press release that businesses can tailor to their requirements.