Meeting old friends and making new contacts is what trade shows are all about. This year’s RWM for us was no exception.

Everyone remembers our “Silver Lady” Routemaster bus and throughout the show we had an endless stream of visitors. Focusing on FM companies, brokers and waste management providers we were delighted to show off the ever increasing range of services the WasteCare Group provides the industrial and commercial sectors. We were also giving away free copies of our much vaunted Waste Guide. If you missed out please email loretta.burton@wastecare.co.uk for your free copy. 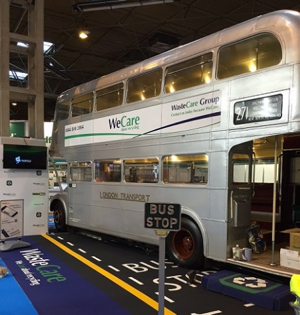 This year’s RWM show was notable for its range of speakers, new equipment and developments. On the speaker front, senior politician Mary Creagh MP addressed visitors. Although a Labour politician, she wields an element of power within Parliamentary circles as she chairs the Environmental Audit Committee which can question the government and notably the Department for Environment, Food and Rural Affairs and make recommendations.
She expressed concern that environmental legislation could be undermined if the UK is to exit the EU and argued that environmental regulations could be among the ‘most affected’ areas of law impacted by Brexit.

Mrs Creagh told delegates that verbal evidence from ministers given to an inquiry being run by her committee in early September, had made it clear that government had yet to formulate a strategy for the environment. Mrs Creagh added that many of the targets and requirements for existing UK is driven by EU Directives. These include the Landfill and Waste Framework Directives, involving targets for landfill reduction and recycling.

However, Mrs Creagh claimed that without the obligation to meet the targets set out in these Directives – the UK would in effect have ‘zombie legislation’ with no potential legal recourse from Europe if targets are not met.
She added: “And of course, in terms of targets and legal action, if we do not have the European Court of Justice to give weight to British legislation as it is enacted, we have zombie legislation, so we’ll end up with no judicial means of enacting EU laws unless we have new British Acts. I think this is quite a big worry. Everything hinges on the government’s approach.”

Other commentators feel that much of the environmental legislation will remain in place and will be incorporated into UK law although the extent could be influenced by any desire within government to reduce ‘red tape’ further although this strategy remains unclear under the new Prime Minister.