The government has announced that the planned 5p levy for carrier bags is to go ahead in England in October 2015 as planned, but a proposed exemption for biodegradable bags has been placed on hold. 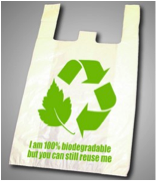 Defra has stated that it had originally included the exemption in its proposals to ‘challenge to UK industry to produce a genuinely biodegradable plastic bag’, but that it is ‘not aware that such a plastic bag currently exists’.

The decision has been welcomed by many within the plastic film recycling sector who have long argued that an exemption for biodegradable plastic carriers could undermine the recycling of other plastic films.

One expert reasoned that it makes sense for biodegradable plastics to be used in some developing countries, especially with open landfills, but to have biodegradable bags in the UK waste stream would “a disaster”.

And she noted that if a company was making a product, such as damp proof membranes, the quality of the product might be called into question.