A man accused of ‘stealing’ a van load of free newspapers from outside Waterloo Station for resale onto recycling companies, has had his case dropped by the Crown Prosecution Service (CPS). 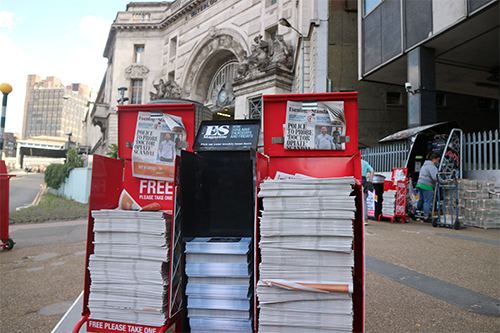 The man from South London had his case dismissed as prosecutors were uncertain about whether his actions broke any laws. Angus Evers, a legal expert from UKELA – the UK Environmental Law Association – and partner and head of environment at Shoosmiths LLP, explained that the investigation was “interesting legally.”

Mr Evers said it was unclear who the materials belonged to, and “where do you draw the line?,” he added. As the next point of call, Prosecutor Jonathon Bryan said the Crown Prosecution Service (CPS) will be seeking further legal advice on whether a free item can be stolen.

A CPS spokesman said that the organisation is considering its next steps and couldn’t comment further.