The recycling and waste management sector is often a focus on the potential for new technology and one of these is gasification.

A report by letsrecycle.com suggests that the energy process is slow to take off for a number of reasons. The work notes that on an industrial site in North East England, work has been underway on a single project with two of the largest waste gasification plants ever conceived for the UK. With a combined throughput capacity of 700,000 tonnes, Tees Valley 1 and 2 have been several years in the making – two identical sites contracted to convert virtually all of the municipal refuse produced in the City of Hull into synthetic gas. But last month with just weeks to go, construction suddenly ground to a halt on TV2 and 700 workers were laid off.

Problems first arose shortly after Tees Valley 1 reached completion. The Billingham-based plant, which will process 350,000 tonnes of waste per year, is mainly sourced under a contract with Impetus Waste Management and could generate nearly 50MW of power for the Grid. The facility had been due to enter operations in summer 2014 – but 18 months later is still undergoing commissioning due to technical issues.

The difficulties Air Products faces as it strives to bring both plants online are symptomatic of wider issue surrounding advanced thermal gasification. The technology has been around for decades, but as of 2015 a UK plant capable of processing waste materials on the same level as a relatively large-scale mass burn incinerator has yet to be built. 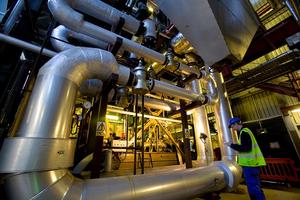 A plant at Avonmouth has changed owners but also faced some technical performance issues. A large new gasification plant is now proposed by Energy Works’ of 240,000 tonne capacity gasification plant for Hull. Elsewhere, waste firm Amey is also installing a 93,000 tonne-per-year gasification plant as part of its anticipated Waste Recovery Park in Milton Keynes, which will generate 7MW of power. The technology has been provided by Energos, a leading supplier of small-scale energy from waste plants and technology.

So, while the jury may still be out on successful gasification in the UK, a lot will become clearer over the next few years as plants come on stream and operating ones resolve initial challenges either successfully or not.