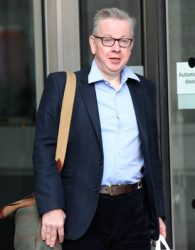 Speaking to an invited audience in central London, Mr Gove delivered a lecture titled, ‘When Will There Be a Harvest for the World?’ on behalf of Theos think tank; covering climate change,  environmental justice and the government’s role as a ‘steward’ of the natural environment.

During the proceedings, Mr Gove said: “It is the case, that we have caused environmental damage and deterioration on a dramatic scale in the last century, with pollution, greenhouse gas emissions, biodiversity loss, habitat erosion, soil depletion and deforestation.”  He continued: “That requires us to think more carefully than ever about how we use resources, how we protect what is precious and irreplaceable, how we manage our way out of methods of production and patterns of consumption which are wasteful and profligate.”

Delegates also had an opportunity to take part in a Q&A session, where Mr Gove was asked whether the government was going to take “bold steps” to address the issue with plastic waste.   Responding to this question, Mr Gove said: “We are going to say more in our Waste and Resources Strategy which will be published before Christmas.

“I can’t pre-empt what we are going to say, but it is certainly the case that we are contemplating more restrictions on certain single use plastics and contemplating what more we can do working with industry.”  Another question prompted to the Environment Secretary was whether retailers would receive tougher measures to increase their recycling activities and reduce waste, to which Mr Gove replied: “There are some companies that can do more, but we believe that the right thing to do is to have the right level of regulation and the right set of incentives to change that behaviour.”