The call to use recycling points comes in the wake of fires in household waste and recycling collection vehicles. Battery expert and scientific adviser to the West Midlands Fire Service, Dave Reynolds, has highlighted the danger posed by some modern batteries. 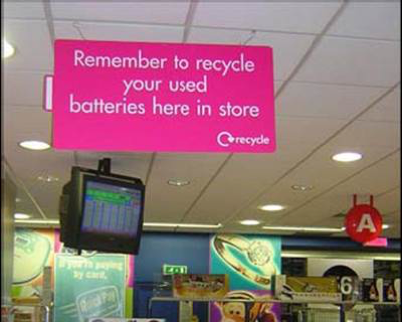 In a statement to letsrecycle.com, the HSE said: “There is a risk that batteries can cause fires when they are disposed of, particularly when mixed in with other domestic waste materials.  Local authorities usually provide separate arrangements for collecting old batteries.

There have recently been two fires attributed to being caused by batteries placed in household refuse and recycling. In March, a collection vehicle for East Northamptonshire suffered a fire with fire crews identifying the cause of the fire as a nickel–cadmium battery. This prompted the leader of East Northamptonshire council, Steven North, to urge residents to make use of battery recycling points in shops and household recycling centres.

And, last month a vehicle collecting recyclables at the kerbside was damaged by fire in Warrington. The borough council said the blaze was likely to have been caused by sparks which occurred when the battery came into contact with the metal floor of the vehicle. 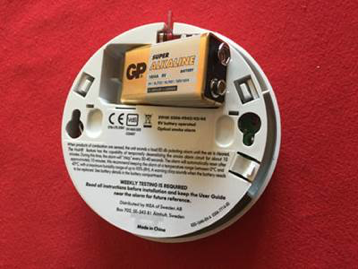 Mr Reynolds, Technical Director at Garforth-based WasteCare, which runs BatteryBack, the UK’s largest battery compliance scheme, said that in his view, the most simple message for the public is that “all batteries present a fire risk as any battery has the potential to spark”.

He added that traditional single use batteries, such as AA and AAA typically used in clocks and torches, posed less risk as they had terminals at both end of the battery.

“The case is that some batteries present a higher risk than others. The question is, how easy is it to short out a nine volt battery, for example the sort that are found in smoke alarms? The answer is that it is very easy, with a paper clip, foil or a staple. There are videos on YouTube showing how easy it is to cause a fire, such as when they are placed next to wire wool.”

Mr Reynolds noted that problems can also arise when the public discard batteries that may still have wires attached to them, such as from toys or other products. “These can more easily lead to a short circuit.”

The battery expert also said that a contributory factor now is the increasing number of lithium batteries on the market, rather than nickel cadmium which are being phased out. “We have seen the case of Samsung lithium ion batteries misbehaving. You also get lithium batteries in smoke alarms and in modern power tools.

“With these batteries the amount of energy released is greater than an alkaline battery and this is also the case with phone batteries. Lithium batteries if damaged or bent can also get an internal short circuit and this can occur if they are damaged in refuse collections.”

Mr Reynolds said that he felt it would be difficult with the recent fires in refuse trucks (RCVs) to establish exactly what sort of battery caused the fire. “We don’t know if it was a short circuit that caused by damage. I think it is more likely that they were caused by lithium or nickel cadmium batteries. We don’t know, for example, if the batteries have come out of an electric razor or from a rechargeable kit with the battery wire left in.”

Batteries by themselves are less likely to ignite; it is within collection vehicles with paper and plastic that recent incidents have occurred.

Endorsing the warning from the HSE, Mr Reynolds said there was still a risk of fire at public collection points. “However, the fact is that alkaline batteries don’t burn well so if a lithium battery is placed in and short circuits it is unlikely to burn. In an RCV you can have plastics and paper which can propagate a fire.

“I would advise people to tape over the ends of battery terminals on lithium and nickel cadmium batteries when they are put in recycling points. Some retailers give this advice but it is hard to get the message over to the public.”

Mr Reynolds explained, “BatteryBack is the largest portable battery compliance scheme in the UK and includes Duracell as a member. He added that the scheme is looking at ways to help spread the message to the public that batteries can be recycled. People also need to be aware of the way they keep batteries for recycling at home. Don’t leave them in a drawer where coins and paperclips can cause a short circuit at home.”