A Darlington man has been ordered to pay back £350,000 under the Proceeds of Crime Act – one of the biggest seizures for the Environment Agency in the North East.

Tony Leigh Shepherd could have to pay back just under £1.2 million – the agreed benefit sum of his criminal activities – if he comes into future assets. 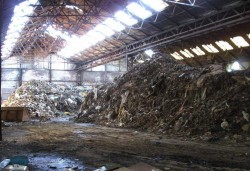 He also pleaded guilty to a third charge of operating an illegal waste site at Barrier Works, Hackworth Industrial Estate, Shildon, between December 5, 2010, and July 8, 2011.

According to the Environment Agency, he had been running a waste transfer facility on the land – illegally depositing, sorting and storing mixed household and industrial waste.

On February 24, 2014, he appeared at Teesside Crown Court where he was sentenced to 12 months in prison, suspended for two years.

Environment Agency officers then began proceedings to recover the value of his available assets that it’s believed was obtained through crime.

On Monday, August 17, following a confiscation hearing at Teesside Crown Court under the Proceeds of Crime Act, Shepherd was ordered to pay back £350,000.

He could face a prison sentence if he fails to pay.