Landfill Tax rates increased across the UK from 1 April 2018 and the tax was extended to include disposals at unauthorised waste sites in England and Northern Ireland. 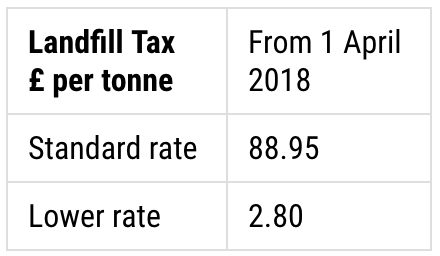 Another significant change from 1 April 2018 is that the Welsh Government now has its own powers to set the Landfill Tax for Wales which is known as the Landfill Disposals Tax (LDT) and which has been confirmed at the same level as the rest of the UK this year.

Scotland continues to have its own landfill tax, and again this is set at same rate as the rest of the UK, and is known as the Scottish Landfill Tax. Scotland already levies the tax on unauthorised disposal sites and Wales has provision to do this also.

The tax rates – all UK areas currently have the same rate – were indicated some time ago and from 1 April 2018 they are: for standard rate material £88.95 and lower rate (‘inert’) material (qualifying fines with a loss of ignition of 10% or lower) at £2.80 per tonne.

From 1 April 2018, Landfill Tax is changing to include disposals at unauthorised waste sites in England and Northern Ireland. These changes aim to support legitimate waste management businesses by creating a fairer tax system and be a deterrent to causing environmental harm by disposing of material at an unauthorised waste site.

In England and Northern Ireland, the illegal disposal tax charge will be the tax level avoided plus up to an additional penalty of 100% of the tax avoided. In Scotland the “unauthorised” rate will be 150% of the usual tax rate.