England’s minister for recycling has confirmed figures which show how recycling at council level is levelling off. 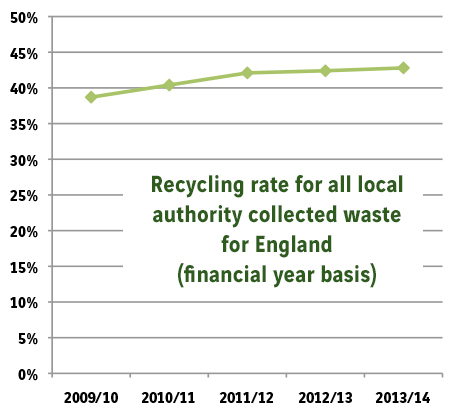 Data, recently issued in Parliament by the minister, Dan Rogerson, shows that for waste collected by councils or their contractors, increases in the recycling rate have slowed. There has been just a 4.1% rise since the financial year 2009/10 when the rate was 38.7% reaching 42.8% in the financial year 2013/14.

The reasons for the slower growth are seen as being quite diverse. One factor is that local authority budgets have been cut and this has seen less publicity for recycling campaigns and accordingly residents have not made as much effort to recycle.

Possible other reasons are that some of the “low-hanging fruit” in terms of recycling have been captured. For example, collections have been successful from semi-detached houses whereas to see rates rise further, more recycling needs to take place from flats which is much harder to arrange.

The government is now looking at ways to increase recycling with the approach that a number of efforts on various fronts is the best approach rather than launching major new initiatives.