Data released in December by the Department for Environment, Food and Rural Affairs showed that the UK’s household recycling rate as a whole was 44.9% for the calendar year 2014.

This was just a fraction up on the year before and shows how recycling rates are levelling off. 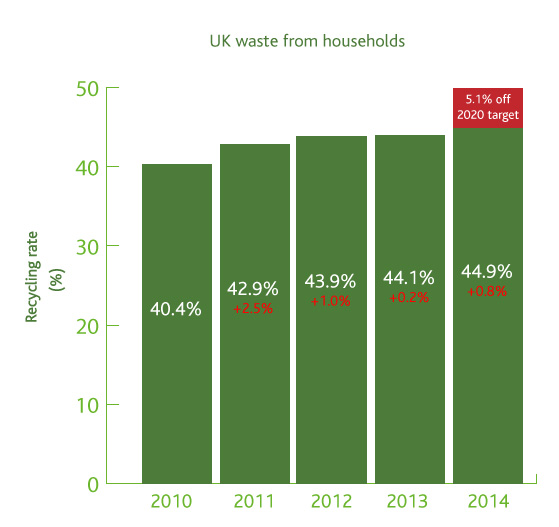 The figures also confirmed that the use of landfill is in decline, a factor which is also apparent in the commercial and industrial sector although fines – smaller inert material – from transfer stations and construction sites are still being landfilled in large volumes. This is particularly the case in the South East of England where construction activities are increasing.

On the commercial and industrial front, exports of refuse derived fuel (RDF) remain the main reason why landfill volumes are reducing in this sector. However, reports from the Continent suggest that incinerators are becoming full and it is now harder to find new outlets for waste material to be burnt.

The landfill data indicated that the UK comfortably met its landfill reduction target for the year to send no greater than 50% of total volume of waste landfilled in 1995 to ground by 2013. In total, the figures confirm that the UK landfilled 23% of the 1995 total.

Taking the individual nations within the UK, Scotland, which is very much a champion of zero waste and recycling, comes out as the worst performer in terms of household recycling at only 41%. Wales leads the way with 54.8%.