The number of waste businesses prosecuted by the Environment Agency rose in 2015, despite an overall decline in prosecutions brought against companies for environmental offences.

And, between April 2015 and March 2016, EA officers shut down almost 1,000 illegal waste sites – more than in the previous two years combined.

Figures published by the Environment Agency revealed that 54 waste firms were prosecuted in 2015 compared to 37 the previous year. 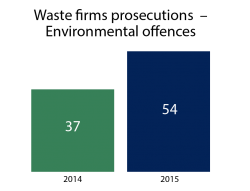 But just 70 companies were prosecuted for environmental offences overall – 14% fewer than in 2014 and one which follows a year-on-year decline since 2007 when more than 300 prosecutions were handed down.

However, while waste company prosecutions were up in 2015, so are the number of enforcement notices served.

“In 2015, 77% of companies receiving more than one caution or enforcement notice were involved in waste activities, compared to 64% in 2014.”